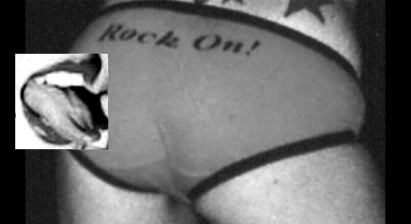 I wipe the mouthpiece and the keys on the payphone inside the bar. I dial Daniel, the booking agent.

“Sarah is licking Shannon’s ass, while she’s on stage, holding the pole,” I say. “I can’t take this shit anymore.”

“Well, it’s her club,” Daniel says, and coughs out what I guess to be a giant bong hit.

“But I have to see it, here, at work,” I say as I look over and see Sarah stand at the rack. “The OLCC says customers are supposed to be a foot away at all times.”

Sarah thrusts her nose right into the center of Shannon’s ass cheeks. Then glides the side of her face along one side of Shannon’s crisp apple bottom.

“Is she licking the hole?” Daniel asks.

“Right now, she is licking the sweat off her cheeks,” I say, my stomach in knots because Sarah is not the most attractive person on the planet. She looks like Animal from the Muppets, but with stringy blonde hair and an amorphous body with no ass of her own. I feel bad for noticing.

“I’ll call you back,” Daniel says. We both hang up. I go back to the dressing room and pack my makeup and stripper shoes into my roller bag.

Daniel calls the same in-club payphone to talk to a sober minor, Kat, to verify my story, even though I hadn’t been drinking.

“That’s what’s going on,” Kat says, waving a customer down from the bar.

“I can’t,” Kat says, then hangs up to give a private dance in a curtained alcove to the guy she just called over.

“Well, you gotta stop her,” Daniel says, blows out more weed smoke in a hellacious cough.

“It’s her club,” Keith says, gives the beer to a loner guy at the bar.

“Keith, even though she’s a woman, she can’t do that,” Daniel says. “Even if they’re the same sex, the OLCC says it’s not okay,” Daniel says.

“I’ve been trying to get her out of here all night,” Keith says.

“We really can’t kick her out of her own club,” Daniel says. “But the OLCC could bust her, so let’s just let her deal with that herself.”

“Exactly,” Keith says. They hang up.

I get dressed and go home, with permission and without getting fined $50 for leaving early.

✂✂✂
Burn all afflictions and clear the way for awakening, Fudo Myo-o! Behold! The Goma 🔥 Ritual @ Seattle Koyasan Buddhist Temple. Being board secretary has its perks - like getting close to the flames. More details on the Henjyoji Shingon Buddhist Temple page on FB.
Fudo Myo-o at Koyasan Seattle. 🙏🔥